Tunneling support systems are a very important safety feature used primarily in the underground mining industries. Recently, one of the major players in this space decided they needed to resolve a problem that had hampered their Newcastle operation for years – which was resulting in lost efficiency, repairs and downtime. They turned to Berendsen’s Engineering & Design team with the mission to re-engineer an archaic hydraulic and control system and rescue them from a tedious and time-constraining maintenance routine.

During an end-to-end consultative re-design and deployment process, Berendsen took the operation from a slow, laborious, manual system with no control, to one featuring fit-for-purpose heavy-duty hydraulics, position and force control, and integrated computerised operation. Going from sweat and spanners to push-button speed and simplicity.

An underground mine is an extreme environment. To make it possible to work at these depths, engineers take special measures to support and stabilize underground rock.

Holes are drilled into the rock surface, into which long lengths of composite wire rope are fed. Specially formulated resin is then injected into these holes, which fills the spaces between wire and rock to create a very strong support system once cured.

However, in order for this to work properly, the wire is pressed into a bulb at regular intervals to give the resin more surface area with which to bind the wire and rock. This task is performed by the hydraulic and control system, which uses hydraulic force to squash the wire at 1-meter intervals.

Problems with the Existing Machine

For decades, the company in question had been getting by with an archaic hydraulic and control system, which was not designed to cope with the workload.

Wire bulbing is a repetitive action taking place thousands of times per day, for months and years. Thus, the speed and reliability of this procedure becomes a vitally important part of the operation that can directly impact the productivity of the mine.

The existing machine had none of the advanced control systems that are available today, requiring set up and adjustment to be performed manually. This was an extremely time-consuming process, which was made worse by differences in wire composition from different manufacturers – requiring the machine to be manually tuned for each new reel.

In addition, the cylinders in use were not designed to cope with high speed, high-frequency loads. In fact, they were low-frequency, low-cycle jacking cylinders designed for slow lifting – not fast, repetitive action. Unable to cope with the duty cycle, these cylinders were failing every two to three weeks.

The cumulative effect of these problems meant the machine would be down for maintenance regularly for hours or days at a time. Leading to productivity issues

As an end-to-end solution, all customization and fabrication was performed in-house, including the manufacture of re-designed, custom-application cylinders, which were produced in Berendsen’s world-class manufacturing facility using CNC milling machines. Many adaptations were required during commissioning and Berendsen worked closely with hydraulic component manufacturers to troubleshoot various aspects and in some cases write and test custom software for the control units and other parts of the system.

With this upgrade, the machine now performs quickly and reliably, with full control over set up and adjustment. With accurate sensors, precise control valves and computerized output, the whole process is now less time consuming, with far fewer interruptions. Ultimately resulting in a significant increase in production output and an immeasurable reduction in the frustration of time-consuming maintenance procedures.

This project is a success story that showcases the end-to-end capability of Berendsen engineering and design. Demonstrating our ability to integrate advanced hydraulic system design and control system programming with custom product design and manufacture to provide an excellent outcome for the customer. 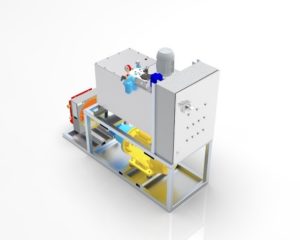 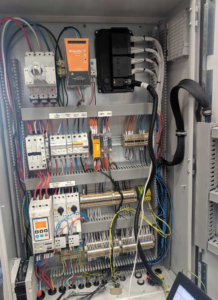